On June 14, 2012, Old South Meeting House hosted a celebration marking the return of the Robinson Half Chest to Boston, where it is now on display at the Boston Tea Party Ships & Museum. This remarkable tea chest is one of only two remaining tea chests in the nation believed to be from the Boston Tea Party on December 16, 1773. Artifacts from the original Boston Tea Party are very rare. Souvenirs of this brave act of protest and treason, like the Robinson Half Chest, were salvaged from the water’s edge, hidden as treasures in homes and attics, and passed down with deep pride through generations. Old South Meeting House has several such souvenirs of the Boston Tea Party in their museum collection, many of which were donated in 1876-77 when the building first opened as a museum. On exhibit now in Voices of Protest are a vial of tea and a tea chest label, both relics of the world’s most famous tea party in 1773. This 18th century tea chest label was donated to the museum in 1987 by the Wells Family Association. Genealogical researcher, author, and descendant of a Tea Party participant, Charles Chauncey Wells researched the connection of the label to his ancestor Thomas Wells, a blacksmith who lived from 1746 until 1810. Thomas Wells worked on the wharves and, like many other young laborers, was entrenched in Boston’s pre-revolutionary rebellion. Down five generations, Charles Chauncey Wells recalls how his grandfather would take the label out, protected under glass, from its hiding place on special occasions to discuss with pride the history of this infamous ancestor! It is difficult today to determine exactly who took part in the Boston Tea Party as participants were sworn to strict secrecy. However, from the evidence of several accounts of the Destruction of the Tea, it appears to be highly probably that Thomas Wells participated in the Tea Party. Thomas Wells was a member of St. Andrew’s Lodge of Freemasons, an organization which had many members who participated in the Destruction of the Tea—including Paul Revere, James Swan, and Nathaniel Willis. He, like many of those involved, would want a keepsake of this protest; a bold act of defiance that they knew would be a history-making act. These souvenirs were collected discreetly as the participants were sworn to secrecy, hoping to evade prosecution! One can imagine Wells pulling the label from the crate and tucking under his clothes, hoping it would not be discovered! The tea that was destroyed in the Boston Tea Party appears to have been of Chinese origin, although it was brought to Boston from the East India Company’s warehouse in London. Contemporary accounts refer to “Bohea” tea, which was a black tea from the Wu-I hills in the province immediately to the north of Canton. Canton was the main outlet for tea on the coast of China, and the British East India Company began regular sailings there in 1699. An imperial decree issued in 1757 restricted European merchants to this port. When the tea label was donated to the Old South Meeting House, experts from Harvard University, Michigan State University, and The British Museum authenticated and translated the document. The label is block printed on rice paper in Old Chinese writing. The paper is of 18th century origin and comes from Canton. The label itself would have been placed inside a wooden tea chest on top of the tea so it could be clearly seen as the chest was opened. Dr. Su, professor of Chinese language at Michigan State University translated the tea label. It reads: All these years, this firm has purchased and selected good leaves from such well-known regions as Cheng-shan and Oo-loong and also tea of all kinds of fragrances for sale. When the honorable merchants of foreign countries patronize us, they are cordially requested to pay attention to the trade mark inside, so that there may not be any misunderstanding. Yours truly, Yuan Tien-fo, proprietor of Shih-mi-liao Chi Tea Company The tea label is on display, a treasonous treasure, and one of many rare, Revolutionary relics, in the permanent exhibit, Voices of Protest, at Old South Meeting House. A special thanks to the Wells family for their generosity in sharing their family treasure with the public. To learn more about the other items on display at Old South Meeting House please visit www.osmh.org call (617) 482-6439 or email info@osmh.org. 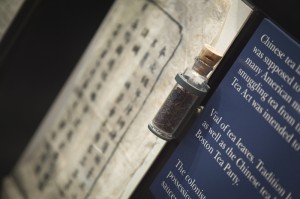 Sign up to receive special offers, discounts and news on upcoming events.